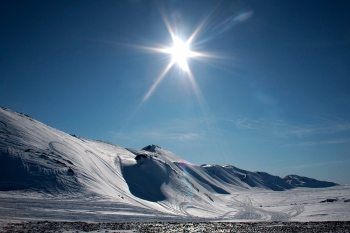 We are full of ideas, of all kinds, actually of all there is, and we put it forward in many ways, in poems and phrases and other writings, without even knowing anything about the truthfulness and importance of what is said and written.
So we spread around us ideas and words, as they are the most important thing in the world, and actually quite new and fresh, and have never been told before.

We have really no idea of the truth of what we say and hear, some are undoubtedly true and other lies.  Everything that has a name, everything that can be put into words exists, but not necessarily and always as the image or form that we have created about it, but it still exists.
A good example is the idea of Santa Claus, it has taken many changes with the times, got different look and meaning, yet we know that Santa does not exist, or does he, is he perhaps something other than a man with a white beard and the red hat, like joy and expectations of children at Christmas?

We are born into a world that is pre-shaped with names of all things, and all of it is legacy of past generations, old memories, of all kinds.  Memories change over time, and all that changes is not real. Everything real is static, the same at all times for all people.

There really exists nothing new under the sun, the moon, or anywhere else in the world.  All that there is to find is old, and all old have names and thereby images or forms.  Sometimes many forms and not necessarily accurate, but still some sort of images and ideas.

Truth is the only reality.  That something may be new, it would have to have a beginning, and at the same time end.  But the truth has no beginning, it is forever the same at all times for all people.

Certainly, the moment is always new. But in fact, it is neither new nor old.  The moment, like truth, has no beginning.
Beginning and ending involves time.  And the truth is not something that begins here and ends there.  The truth is.

The time does in fact not exist.  This term is created by humans, as a unit of measurement, for humans to use.  Nothing else.  Time, like other terms, does not really exist.
And if time has no real existence, then it belongs to the illusion.  Which in turn means that all that is dependent on time is also illusion.

Everything that has a beginning and an end is an illusion.  It is just a fact.  The sun is not forever, it was born and will die, everything that can be found under the sun, all of these organisms on the earth, have a beginning and therefore also ending, also the words they create.  But the words still live for centuries, as they travel from generation to generation, but still comes the moment they are gone, and only the old memories left, stored and forgotten in museums.
There is nothing new under the sun.  It is just nothing more complicated than that.